Women and Hormones – HRT Therapy for Menopause and Perimenopause 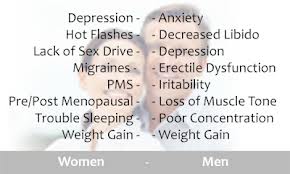 As the female body ages it is increasingly unable to produce healthy levels of the hormones that her younger body once produced. Replacing the deficiency with natural or bio-identical hormones (Estrogen / Progesterone /Testosterone during perimenopause and menopause enables longevity with vitality. Symptoms related to hormone deficiency can be managed and often reversed by restoring the depleted hormones with Hormone Replacement Therapy (HRT). Women treated for hormone deficiency report feeling younger with restored passion and zest for life.

As the male body ages it begins to decrease production of the primary male hormone testosterone. The symptoms of testosterone deficiency or “Low T” are often attributed to aging and therefore not considered by many in the medical community not to be a treatable disease condition, but instead a function the aging process. This period of a male’s life is often referred to as andropause or “male menopause” when men begin to see a decline in overall health, performance, and their sense of well being.   During this stage of a male’s life the body can simply no longer produce a sufficient level of testosterone resulting in the body, mind and sexual function to begin a stage of decline.  Testosterone deficiency is treatable with bio-identical hormone replacement therapy (BHRT).  Men report an overall improvement of mental stamina and mood, renewed physical development, and revitalized sexual energy.

Many common problems such as fatigue, depression and difficulty losing weight can be due to low thyroid, however, many people, especially women, are not getting the treatment that would be of great benefit. TSH, T4 and T3 testing do not often pick up severely low thyroid levels, which are the only testing done in most cases.