What Are Male and Female PT-141 Peptide Treatments?

PT 141, or Bremelanotide – PT-141, also known as Bremelanotide, is peptide hormone that activates melanocortin receptors. PT-141 binds primarily to melanocortin 4 receptor (MC-4R) and MC-1R.MC-4R is known to produce sexual arousal in the central nervous system and influence sexual behavior. PT-141 is a derivative of another melanocortin, melanotan 2.has been shown to have substantial effect on libido, creating sexual arousal in both men and women.

With proper dosing PT-141 acts within 30 minutes of taking the troche and effects may be felt up to 12 hours from the time of administration and have been known to last for up to 3 days, diminishing each day. PT 141 increases sexual desire via the central nervous system and does not act upon the vascular system. PT-141 was developed from the tanning peptide Melanotan II.

What are the Effects on the Libido in Men using PT 141?

PT 141 is effective in treating sexual dysfunction in men – impotence / erectile dysfunction and premature ejaculation. In initial testing, Melanotan II did induce tanning but additionally caused sexual arousal and spontaneous erections as unexpected side effects in 9 our of 10 male volunteer test subjects. PT- 141 has been shown to have significant results on male test patients, with what is described as “intense” and “frequent” erections lasting between 2-6 hours.

“Bremelanotide can be an alternative treatment for erectile dysfunction with a potentially broad patient base.Because PT-141 works via a different mechanism than drugs like Viagra, it is possible to treat sexual arousal disorders in both men and women that stem from causes other than reduced blood flow to the genitals.” https://www.ncbi.nlm.nih.gov/pubmed/18206919

A study of men with ED who did not respond to Viagra found that roughly one third experienced adequate erection for sexual intercourse with PT-141. 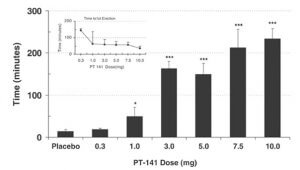 PT-141 is sometimes referred to as the female Viagra because it is the only known medication that can be taken as needed to rapidly boost libido and sexual performance in women. Aside from its ability to promote sexual health.  Recent studies have shown that over 43% of the women in the United States experience little or no sexual satisfaction from orgasm and only 25% achieve orgasm with intercourse.

History of PT-141 and Melanotan II

In the early 1960’s several studies showed that administration of α-MSH (melanocytereceptor stimulator) caused sexual arousal in rats. By the 1980s, scientists began developing analogs of α-MSH as potential sunless tanning agents. Some of those analogs included melanotan-I and melanotan II.One of those scientists, Mac Hadleyconductedan experiment on himself with the peptide melanotan II. He injected himself with twice the dose that he intended and as a result, experienced an eight-hour erection.

After seeing the sexual benefits of Melanotan II the peptide was then broken down and isolated to find the specific part that caused arousal. That isolated part is what is now known as PT-141 or bremelanotide.

Other Benefits Being Researched for PT-141